Juniper Networks announced its Firefly Suite for virtual-machine security, a set of software-based products for VMware and KVM that contain the security and switching capabilities found in Juniper’s SRX Series Services Gateway, as well as Junos Space Virtual Director. 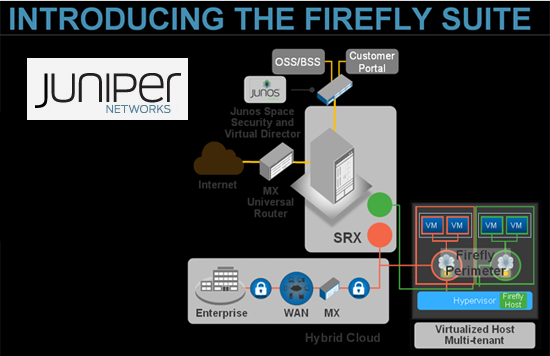 The suite includes Firefly Perimeter, which depending on a data center’s topology, could be used for segmentation in lieu of a physical firewall or in conjunction with it, says Tamir Hardof, Juniper senior director, product marketing security.

“It can be seen as supporting growth that you have for physical firewalls or as a replacement for physical firewalls,” Hardof says. The Firefly Suite also includes Firefly Host (formerly called vGW Virtual Gateway) that acts as a stateful firewall between virtual machines, also providing intrusion-detection, VM-specific antivirus protection, among other security features. Hardof acknowledges that Firefly Host does compete in some basic ways with VMware’s NSX technology.

The Firefly Perimeter virtual-machine software supports an estimated 4Gbps throughput, while the Firefly Host supports about 30Gbps, according to Hardof. Firefly Host, which is tightly integrated into the VMware hypervisor and management framework, is available now, while Firefly Perimeter, which is designed to be integrated with Juniper’s SDN controller Contrail, is expected to ship around March. Pricing isn’t available.

In terms of its security products, there has been some bad news for Juniper this week. Juniper investor Elliott Management, which owns 6.2% of the company, was heard loudly criticizing Juniper’s security-product strategy as “mis-executed.” On top of that, NSS Labs, which tests security products, issued its most recent comparative-analysis ratings of 10 vendors’ intrusion-detection and prevention products, giving the Juniper SRX5800 the only negative rating of “caution.”

The NSS Labs report, based on tests of security, performance, management and “total cost of ownership per protected Mbps,” indicated the Juniper SRX5800 IPS received the “caution” rating because it tested out “below average” in security effectiveness and TCO.

The Fortinet FortiGate-3600C also tested “below average” in “security effectiveness,” as did the HP TippingPoint S7500NX, but these two products earned “above average” and “average” respectively in terms of TCO, which got them a “neutral” rating overall. “Recommended” ratings from NSS Labs went to the Check Point 13500, the Dell SonicWALL SuperMassive E10800, the McAfee NS-9200, and the Stonesoft 3206. The Sourcefire 7120 and IBM GX7800 got “neutral” ratings from NSS Labs because even though these two IPSs were “above average” in “security effectiveness,” their TCO values were “below average.”