Millions of users worldwide were greeted with a message in the chat section stating “Messages you send to this chat and calls are now secured with end-to-end encryption.” and with that we are pretty sure that many government organisations may have panicked. 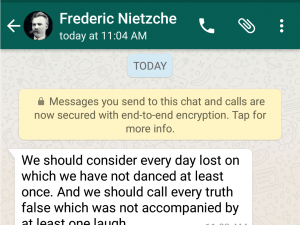 Clearly, WhatsApp could have put out a slightly longer explanation on WhatsApp encryption instead of the one above, that lead to mass panic with everyone trying to get on board the encryption bandwagon by trying to verify themselves on their chats.
WhatsApp did provide one on its blog from which a small excerpt is being shared below:

WhatsApp has always prioritized making your data and communication as secure as possible. And today, we’re proud to announce that we’ve completed a technological development that makes WhatsApp a leader in protecting your private communication: full end-to-end encryption. From now on when you and your contacts use the latest version of the app, every call you make, and every message, photo, video, file, and voice message you send, is end-to-end encrypted by default, including group chats.

The idea is simple: when you send a message, the only person who can read it is the person or group chat that you send that message to. No one can see inside that message. Not cybercriminals. Not hackers. Not oppressive regimes. Not even us. End-to-end encryption helps make communication via WhatsApp private – sort of like a face-to-face conversation.

If you’re interested in learning more about how end-to-end encryption works, you can read about it here. But all you need to know is that end-to-end encrypted messages can only be read by the recipients you intend. And if you’re using the latest version of WhatsApp, you don’t have to do a thing to encrypt your messages: end-to-end encryption is on by default and all the time. – Whatsappp blog

WhatsApp encryption is turned on by default for all users

Users so far have no choice to opt out of the encryption for now (considering the number of encryption cases popping up worldwide, we are pretty sure nobody would want to opt out). As long as you have an updated version of the WhatsApp app on your supported mobile platform, you and your friends can now enjoy the perks of secure and end-to-end encrypted conversations turned on by default without any extra taps.

How do I know that encryption is switched on?

Well you simply tap on the profile or the info page(tap on the name in the header) of your contact, where you will find a section describing the status of the encryption of your chats and calls.

The latest version of Whatsapp app

No matter which platform you are on, you may have noticed a slew of updates (like on iOS) that claimed “Bug fixes” coming in the past few days. Indeed, this was the WhatsApp team making a couple of tweaks, with most of it coming from the server side and some for a user’s smartphone. With that said, you and your friends will need update their respective WhatsApp apps on their respective smartphones that run different mobile operating systems (Android, iOS etc.). If your friend has not updated their app to the latest version you will be notified about the same in the info page under encryption.

Upon accessing the info page, you will be able to check on the status of your encryption. The point to be noted here is that it is turned on by default, meaning you do not need to go any further.

Only those who updated their app later or changed their smartphone after the time the encryption was rolled out who will need to access this area to verify (or check) whether their encryption is working or not (in all probability it will be, but more on that in our next pointer). So for the most of us, we will not need to tap on the Encryption section.

It is still a bit of a mess

Even though most will not need to access the Encryption section on the info page, users may have noticed that some of their friends even with their updated versions of the app still show that their messages are not encrypted. While the WhatsApp states that their apps may not be updated to the latest one, we think that this is a bug. We tested out the same in our office and with one iOS user connecting to an Android user, things worked fine.

With another Android user however, it kept showing encryption turned off even though the iOS user was greeted with a chat encryption turned on message. This could either be a bug, or its just that the feature is gradually rolling out server side, so there is absolutely no indeed no need to panic.

End-to-end encryption on WhatsApp applies to everything or every feature that is available on WhatsApp. Whether it’s calls, messages, photos, videos, files, and even voice messages, all of them will be encrypted. So technically nobody apart from you or your friend will be able to understand them. In transit from one device to another the data will only appear to be garbled text without the keys to put that text together, which resides on devices being used to communicate. Moreover, there are separate keys for each conversation or chat so WhatsApp has provided something really secure indeed.